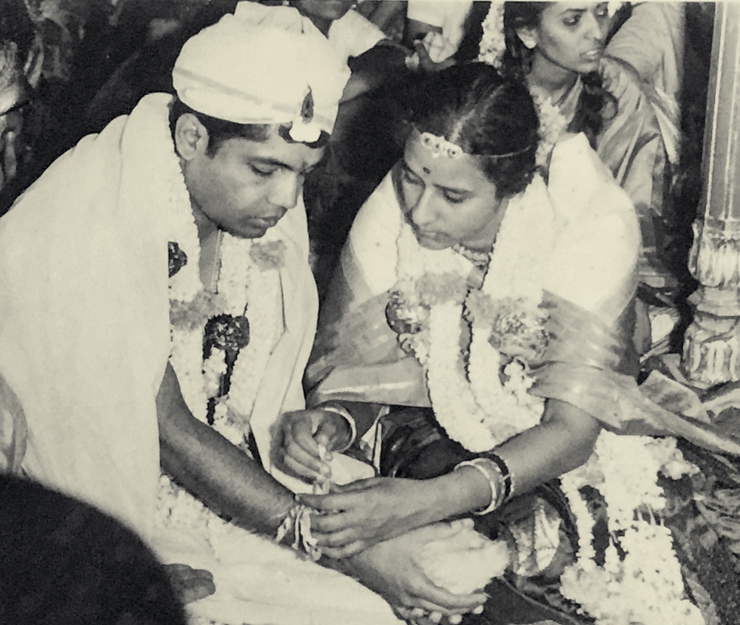 Where do I begin is a big question?

I think I can compartmentalize my life so far into three segments.
I will start with the second segment of my life first, and call it PART I. You see, this year, 2020 is a landmark in many ways. I turn 70 and this would be the year when my husband and I would have marked our 50th wedding anniversary. It feels like a lifetime ago…March 30, 1970.
So this is how it all started…
In India back then, and even today, the majority of marriages are arranged. But in reality, not ALL marriages are arranged. There are a few of us women, strong-willed, independent kind for whom nothing could be ‘arranged’.
Don’t take me wrong…in my opinion, it is one of the best ways to meet and marry. The parents do all the research and compatibility is the key. In most cases, we are how/what we are raised as. So two people raised in similar situations (economically as well as life values) make for a better chance of compatibility. You might say, what about love? In my opinion, love comes later…throughout ones married life. It evolves…from a mere ‘physical attraction’ to ‘caring’…and that latter, in my opinion, is TRUE LOVE. Shared experiences such as childbirth, job losses, financial troubles, loss of loved ones, etc., bind and bond two people, that is, unless it becomes the cause of falling apart. A meeting with an eligible bachelor can be facilitated.
And that is exactly what happened in my case…..
I was born to my parents rather late in their lives. Dad was already over 40 and mom, 30…a bit too old for those times. The story of my parents marriage is a very unique one and deserves a whole new ‘Part’, if not a whole new book! A marriage between a widower and a child bride/child widow…a huge taboo, second marriage for both! A scandal you might say; a widow remarriage was unheard of and not the norm in those bygone days, (but it was ok for a widower to find another wife)…and that had an affect on my getting married too, in the conventional way.
But trust me, my dad and I never believed in adhering to convention and to the chagrin of my poor mother, who totally adhered to social norms, this was a hard pill to swallow! Two stubborn individuals! So due to my parents’ age, and especially given the circumstance of my parents’ marriage, the pressure on me to get married at the earliest, was immense.  Vicious rumors were spread in the small community and in the light of this, and so as to not cause my parents any grief, I agreed for them to start looking for an eligible groom. I was a mere 18 year old at the time when the ‘hunt’ began!

Well…many suitors were turned away by me…most were deemed too old and a few that were reasonably young, I found them immature! One, a physician, lived on the same street, just a few doors down from me… he was over 30 and I thought that was too old back then! You see, it’s the girl’s parents who approach the parents of the boy…so for the girl to turn down a boy, is scandalous. Oh, I was rejected too, by a couple of guys-how dare…they didn’t know what they missed, hah!

I was getting a bad reputation in our small community (Brahmin caste and sub-caste within that larger group). People would gossip and I was frankly told to my face that I was too picky and rejected perfectly eligible gentlemen and would never get married at this rate. Hah, I said…that’s fine by me!

I was gone on a study tour across India, for a fortnight, and little did I know that a ‘suitor’ would be waiting for me when I got home. My husband had an advantage…he had visited my parents’ home with his brother and sister-in-law while I was gone, of course, saw my pictures and heard all the praise from my parents. It was like they were ‘selling my virtues’…an argument as to why he should marry me! I was an artist of sorts and my dad very proudly showed off my art work to the visitors.

I think my husband, then just a prospect, was very impressed. He told me later that this one b/w picture of me, was the selling point! Can you imagine in this day and age? Guess a picture is still worth a thousand words, hah! So when we met, we exchanged pictures. Like we needed pictures to remind us of how we each looked! After all, we lived in the same town and saw each other every single day from the time we were engaged, up to when we got married!

So after seeing my pictures, paintings and listening to my dad brag about me, the day came when we actually met face-to-face. The rumor mills started spinning and it seemed like the whole neighborhood knew that an ‘interview’-that is what it used to be called, was to take place! There were hardly any phones in those days, and internet was not even a thought, so how did the word spread? So annoying for a 19 year old ‘independent-minded’ young woman!

It was late evening and my mother was filled with excitement and dread. My aunt from another town, had come over to ‘help’. Snacks were prepared with great care and I was ordered to dress in my best. It all seems so ‘primitive’ now, but that is how it was back then, and perhaps still is!

My suitor arrived with his brother and sister-in-law and I to this day, remember what he wore. Not sure what I was wearing…a saree of course, but which one, can’t remember. I acted very nonchalant, almost annoyed that I was going to be ‘paraded’ in front of these strangers.

To my surprise, these people were the nicest. My suitor was visibly nervous… I, on the other hand, was quite amused. They let us two be alone, first on the veranda, and then we took a walk up the street. As we approached the street from my house, the lights in the neighbors homes turned off…they did not want to appear to be peeking at us, but they were! I remarked this to my suitor and I think we got a chuckle. I always took my ‘favorite guys’ to this spot up the street, a lookout hill from where you could see the city lights. We talked, and he told me about his life in the US (he had come to school to the US to do his masters in 1965; worked in NY City after he graduated; and then returned to India in 1969 to see his family and perhaps find a life partner). I am sure I babbled too…who knows what. But I think he found me amusing. Most ‘girls’ did not ‘talk’ to the guy, and definitely not suggest taking a walk! Actually, I think he found me refreshingly ‘bold’ as they referred to girls like me. What he told me just a few weeks before he passed away, confirmed to me what a first impression I had made on him and it was re-inforced throughout our marriage.

After a couple of hours, they left. My dad asked for my impression of him. I was non-committal…what if he did not like me. So I said that he was ok…but said something about his nose, just in case he rejected me!

The next day, in a very modern and non-traditional way, my suitor came to my home and told my parents that he would like to marry me. Wow…that was hardly the traditional way-normally either his brother would have come over or sent word with a common friend. I was VERY impressed and I think I fell in love with him at that instance! This all sounds like a Jane Austen novel…doesn’t it?

I was at school and was on my way home on a bicycle. I heard his brother’s car (which had a hole in the muffler and made a racket) and wondered what the verdict was. My mother very shyly informed me that Venkatesh had approved and asked to marry me. My heart went into a flutter…I admitted to myself that I was IN LOVE!

In my husband’s case, a very eligible bachelor (good looking, highly educated, ‘foreign-returned’, coming from a great family-dad was a well-known physician, etc.), he had ‘met’ several prospective ‘girls’ but hadn’t felt the ‘chemistry’ with any of them.  I knew a few of them and they were no chopped liver…lucky for me!  So as they say, marriages are made in heaven, might just be true!  I certainly believe in fate, kismet, karma…or what ever it might be called.

After three months of post-engagement courtship when we saw each other every single day for hours, much to the chagrin of my parents and his mother, we were married on March 30, 1970! It was a very traditional Indian wedding…with, it seemed like a total of 1,000+ people in attendance, over a period of three days of the wedding ceremonies and rituals. Here are some pictures from our wedding album:

Now we are Mr. and Mrs. Damoor S. Venkatesh!

Well I hope you have enjoyed this section of “The Story of my Life-Part I”.
More to follow including photoblogs of my travels.

Please feel free to leave a comment….Thank you for visiting… Namaste!

42 thoughts on “The Story of My Life-Part I”